By Chris Evans / The Freedom Forum

NEW YORK — Edward Albee has been fighting censorship for longer than many other playwrights have been alive.

At the age of 12, the author of Who’s Afraid of Virginia Woolf? and Broadway’s current The Play About the Baby, wrote a three-act sex farce for his mother. And, he told an appreciative audience May 18 at the First Amendment Center, almost immediately he found his work censored. 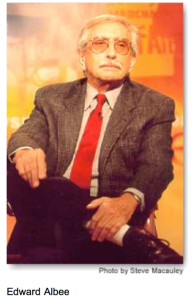 “I gave it to her to read, and it was not discussed after that,” the playwright said. “She became my first critic. As I think about it now, she might have been a good critic, but I didn’t approve of it.”

Albee, 73, has been wrangling with censorship ever since.

In a taping of the center’s weekly television show
“Speaking Freely,” the prolific playwright — who’s written more than 25 works — shared with Ken Paulson, executive director of the First Amendment Center, the wit and irreverence that has continued to make him a target of would-be censors.

For example, speaking of his pre-teen sex farce, Albee made the first of several off-color quips that drew laughter from the 100-or-so drama lovers gathered for the taping: “I didn’t know much about farce and even less about sex,” he said. “Or at least my knowledge of sex was singular.”

Paulson asked about specific incidents of censorship, starting with Albee’s first produced play in 1959. The Zoo Story, about a bum tempting an executive to commit murder, began its run in Germany but met resistance in the United States, when the community of Rockport, Mass., lambasted the play for its violence and homosexual overtones.

“I thought those were undertones,” Albee commented. He added that people in general, from the residents of Rockport to the writer Philip Roth, whom he described as decidedly “heterosexual,” often seemed to get angrier at him as writer than at the work he produced.

It is important, he said, for artists not to let criticism, personal or otherwise, silence them.

“The censorship we impose on ourselves in more insidious” than any government censorship, he said. “You should be holding a mirror up to people and saying ‘This is the way you behave, and if you don’t like it, you should change.’ ”

“Many times people say, ‘No, you’re wrong,’ and that is the chance you take.”

He added, “If everybody likes what you’ve done, you should ask, ‘What have I done wrong?’ ”

People frequently have not liked what Albee has written, and he has fought back.

When Virginia Woolf, his celebrated play about a hard-drinking academic couple who struggle for power in their marriage, arrived in England, an office assigned to edit out lines that might be offensive to the queen had 75 objections to the text, starting with the opening line: “Jesus H. Christ,” Albee recalled.

At first, in asking why the line was offensive, Albee joked, “Is it the H?” Then later, he added, “I said, as a joke, ‘How about “Mary H. Magdalene?” [The official] thought, and he said, ‘Yes, that would be lovely.’ ”

The play went on just as it had in America. A year later, he added, the British “censorship office” closed.

Playwrights need to stay true to their visions, he said, especially today, because live theater can affect people in ways few other media can.

“Live theater has a role that has been almost completely abnegated by film and television,” he said. “You can go to a movie and watch somebody get his head blown off and chew your popcorn. (But) try that in live theater. People would be running and screaming … because there is a kind of reality to the theater.”

Even in theater, however, Albee stresses there is a distinction between serious work and fluff.

“Look at Broadway,” he said. “There is almost nothing on Broadway that engages the mind. The situation hasn’t changed much since I started writing plays. The best stuff is always in the small theaters.

Of course, the largest numbers of people go to the escapist fare of movies and big Broadway productions, he added, and changing that trend poses no small problem.

“We have to start educating young people in the arts,” he said. “Once young people start accepting something as natural, then wonderful things can happen.”

Albee said he’d continue to hold up the artist’s part of that bargain by providing his own vision, free of self-censorship, and by fighting any outside censorship that comes his way.

“I hope my plays are useful,” he added.

This news story originally appeared May 21, 2001, on Freedom Forum Online.